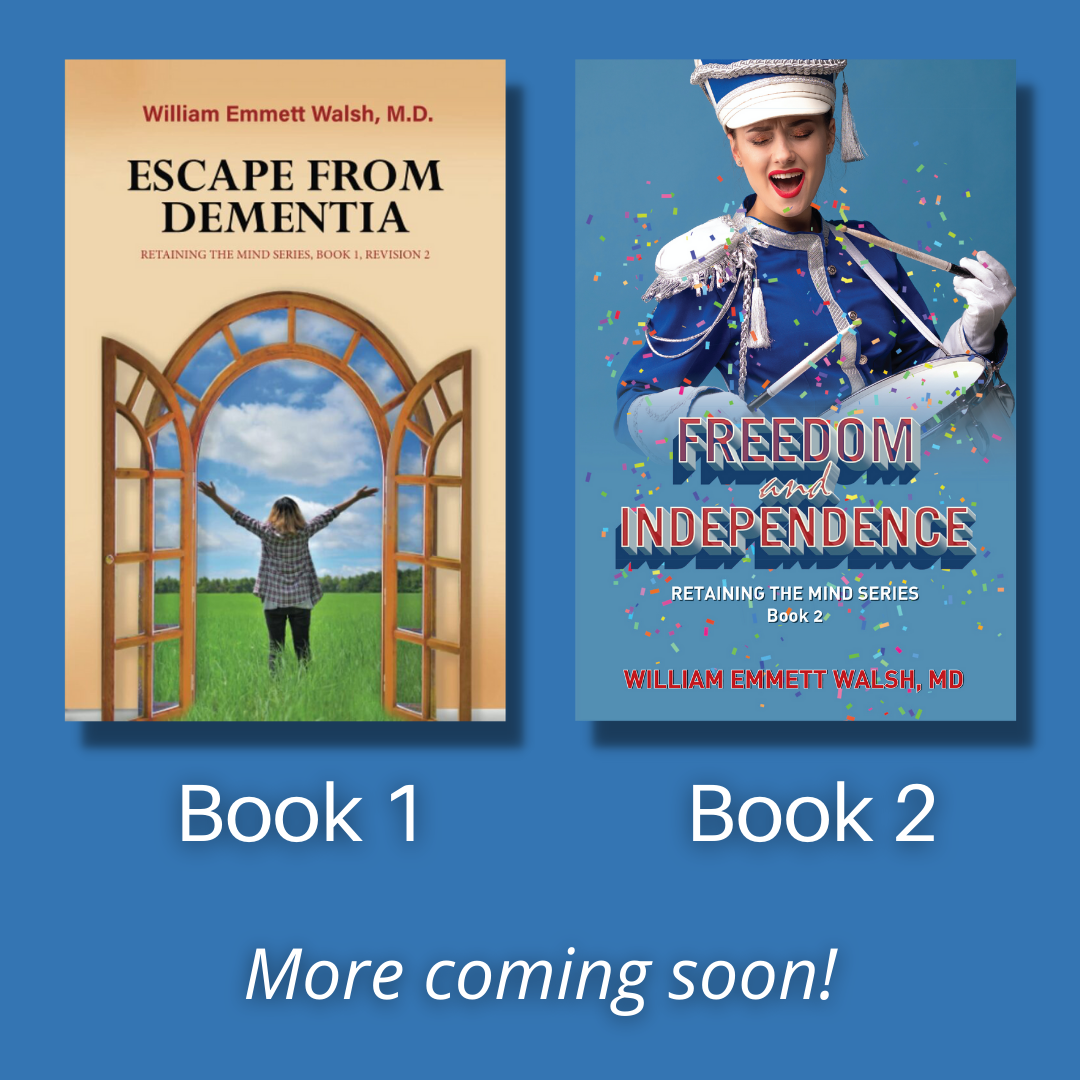 Learn how a retired Mayo trained consulting allergist and immunologist with over 40 years of patient experience became keenly aware of the damages caused by our modern diet.

W. Emmett Walsh, MD shares how our foods and beverages brought on his own dementia as he shares his journey to health and his recovery of his mental acuity and independence.

Alzheimer's disease, Lou Gehrig's disease, Parkinson's disease, and other diseases share one characteristic. These diseases damage nerves in the brain so severely that the brain becomes demented. They also damage the body's nerves promoting diabetic neuropathy, migraine headaches, immune disorders like lupus, infirmities of aging, and other diseases. This nerve damage is lethal.

Dr. William Walsh revised and refined his book, Retaining the Mind, published in 2016, to produce Escape From Dementia. In it, he discusses how our modern diet causes or worsens many nerve-damaging diseases.

Dr. Walsh shares his extensive knowledge of food sensitivity and the diet that allowed him to recover from Alzheimer's and Parkinson's diseases. He knows both dementias and how to stop their nerve damage, allowing the brain to heal.

You can use his knowledge to reverse dementia's deterioration of the mind and body and regain the youth, mental acuity, and memory that dementia stole from you.

A MESSAGE FROM DR. WALSH

I want you to continue to enjoy a healthy happy life , for many years to come!

I recovered from combined Alzheimer's and Parkinson's diseases with the help of a special diet taught to me by my patients. Some highly rated diets, including the Mediterranean, DASH, and MIND diets, slow the onset of dementia. However, they do not restore the mental ability that allows millions to live independently with an intact mind. They do not prevent death from dementia. My diet arrests these diseases and saves lives, including my own!

No diet can cure dementia, but my diet restored my ability to think, speak, plan, and live independently. It helps me feel far more alert and active. I also feel younger because my diet limits many foods and beverages that age us. For this, I am grateful: living longer while feeling younger is a blessing.

Dementia is a simple disease, and you already know much about this disease and how to fight it. You do not need a long, complicated book to handle dementia.

Therefore, I keep my books short and the wording plain. They guide you through the treatment path I followed to resist illnesses to bring me out of dementia. I pray that you or someone you care for will follow my suggestions and share my joy in the return of an alert mind in a healthy body. And enjoy the gift of a longer life.

How I Recovered From Dementia by Dr. William Walsh is, without exception, the most readable, understandable, “user-friendly” book on medical science I have ever read. It is written for laymen. You don’t need a medical degree to understand the information presented, and this is one book you are going to want to read.

Walsh is a well-trained physician, having an association with Mayo Clinic’s allergy and immunology program. Throughout his 40 years practicing medicine as an allergist, Walsh discovered that certain foods contain what he calls “aging chemicals.” Some of these chemicals are artificially added to processed foods, but many of them occur naturally. When consumed in excess, they can cause a variety of problems from joint pain and migraines, to insomnia, brain fog, and even dementia. With this discovery, Walsh was able to halt and reverse the advancement of his own dementia!

There was honestly nothing I disliked about the book. Walsh distinguishes between a food allergy that must be avoided at all costs, and a food sensitivity that can be enjoyed in moderation. Many articles warning against the dangers of the modern diet are both alarmist and extremist. Walsh takes a balanced, scientific approach. He shows how even chemicals (such as monosodium glutamate) that are known for harming the body, are actually naturally occurring in many foods and serve a purpose. It is up to the individual to determine for himself what his body can, or cannot, handle. Walsh credits the reader with the intelligence to figure out the difference.

On a few points, Walsh makes some assumptions. To his credit, whenever he speculates, he is clear that there’s nothing in medical literature (yet) to prove his point, but the reader can clearly see why it is a reasonable conclusion to draw based on the evidence that is available.

Walsh is very skilled at providing clear, simple explanations for complicated scientific facts. Science is not my forte but Walsh wrote in such an engaging tone, that I remained interested. The book is also organized well. The various chemicals that age the brain and cause harm to the body are organized by category and explained clearly.

There were a number of typos scattered throughout the book. These typos tended to be a misspelled word here and there with some missing punctuation. There were no glaring grammatical mistakes making the content difficult to understand. Due to the number of these typos (14), I cannot give it a perfect score, but that is the only reason for which I must subtract one star. With one more round of editing, I would happily give this book four out of four stars. As currently edited, I can only give it three out of four stars.

If I could make one suggestion to the author, it would be to tweak his title. The title is certainly attention-grabbing, but it’s also a bit misleading. This is far more than an autobiography of his own personal journey. This book presents scientific explanations for why so many people have various health issues. I heartily recommend it to everyone. After all, we’re all aging, but the information in this book can show you how to slow the progression and even reverse the damage already done.

I am so thankful for this book by Dr. Walsh. At first, I thought it was going to be his story of how he recovered from dementia--which would have been amazing in its own right--but the book is so much more. It is for anyone who suffers from brain fog, fatigue, migraines, insomnia, and more.

The thing I liked best about Dr. Walsh's writing was his explanations. My brain isn't hard-wired for science, but he explained how certain chemicals found in our foods can have devastating effects on our minds and bodies, and he explained so clearly and simply I could understand him easily. I also liked the fact that he isn't an alarmist. So many websites online present articles by self-styled "doctors" claiming someone should NEVER eat this, that, or the other. Dr. Walsh, as a respected medical doctor who was a fellow with Mayo Clinic, doesn't do that. In fact, some of these chemicals occur naturally in foods! It's not all Big-Pharma's-out-to-get-you conspiracy. With the scientific understanding Dr. Walsh provides in this book, you'll be able to take a knowledgeable, balanced approach to your diet and still get feeling better.

This isn't my typical genre of what I like to read, but I shall always be grateful I read this book. I've been telling my friends and family members about it, too. It contains very valuable information, backed by science, that can make an incredible difference to the health of many people.